VÖLKEL GmbH is a globally operating manufacturer of thread cutting tools. With the broad and deep product range and the taps production experience of 100 years, the family enterprise is one of the global leaders of ex stock available standard threading solutions for use by hand and machine. The product range of VÖLKEL thread cutting tools is completed by the range of V-COIL Thread-Insert-System. More than 9.00 products, according to numerous international thread standards, in many dimensions and coated on request, are supplied with an availabilty of over 99%. The worldwide sales intracts with an export share of about 67% in more than 70 countries and is organized exclusively via the central warehouse in Remscheid. So, the quality of the product and the quality of supply is ensured at all times. 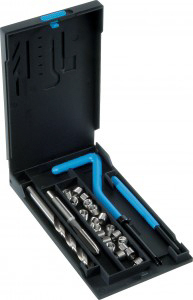 Widespread Thread Repairing assortment with inserts and Tools up to M36 for different types of threads (M, Mf, UNC, UNF, UNx8, BSW, BSF, G(BSP)) as well as Special applications such as preventive measure, available on a daily Basis.